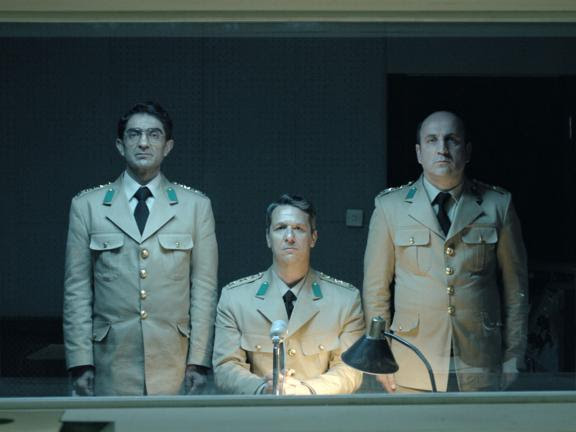 “The MFA Film Program and the Turkish American Cultural Society of New England are proud to present a selection of short films and documentaries as part of the 24th Boston Turkish Festival’s Documentary & Short Film Competition. The first of its kind in North America, this competition, which celebrates its 14th year in 2019, has transformed into a tradition and received remarkable international attention. The competition opens with Mahmut Fazıl Coşkun’s feature film The Announcement, winner of Special Orizzonti Jury Prize at the Venice Film Festival. Following the screening, don’t miss a Q and A with the director and reception in Taste with live music.

More than 30 films are screening at this year’s program. Screenings take place at the MFA on November 15, 16, 22, and 24, and at Boston University on November 18. In addition to jury selections—Best Documentary and Best Short Film—Audience Awards are announced. In this rare opportunity, Boston-area film enthusiasts can explore works by young filmmakers firsthand.”

Members of this year’s competition jury include:

All films are in English or with English subtitles.

Since 1952, Mann Orchards has been making its pies, all by hand. Every one of our pies is filled, topped, milked and boxed by hand, fresh every day.
— Read on www.mannorchards.com/bakery/homemade-pies/

Well I guess I couldn’t resist adding to my mail order pie list on pie day on my blog today.

Sometimes it’s a relief to leave dessert to the experts when cooking for a crowd. From classic pecan to over-the-top s’mores, here are 21 amazing pies
— Read on www.foodandwine.com/slideshows/best-pies-order-thanksgiving

Hah! Well here are some more pie delivery shops. Oh boy, it’s like everything I do today on this blog is fabulous, as in, it’s like a fable. So have a fabulous holiday whenever you celebrate it!!!! Now to then.

Explore the best mail order pies from legendary spots across the USA. Find the best selection of mail order pies delivered straight to your door! Sign up now and enjoy 15% off your first 3 orders.
— Read on www.goldbelly.com/foods/pies

Woohoo!!! I need to remember to put Goldbelly on my sidebar ads.

Find the best mail-order pies on CountryLiving.com
— Read on www.countryliving.com/food-drinks/g1039/best-mail-order-pies-1110/

This is just an article I’ve found. I haven’t confirmed to know it’s all true but it should be, right?

Looking for simple no bake recipes for the holidays? Here are 10 simple no-bake holiday pie recipes.
— Read on hip2save.com/recipes/10-super-simple-no-bake-holiday-pies/

I guess I just feel like advertising a little today and since I’m not an advertiser per se, also to advertise something or somethings which can’t be bought easily … like pie in a store in a foreign state! There’s a lesson for all of us in this somewhere besides Utopian transfer transportation systems but I don’t know what it is. All the same, I like to advertise interesting places time to time where I can.

What a nice store. They don’t have any online or out of store location orders. But it was so glamorous in the old school tradition of authentic American, I had to feature the shop.

Seriously, in the future when you can use transportation of a kind that transfers you from one city to another & then a town to town faster than car or bus, I wonder what local stores and commerce will be like? A person in Seattle could make an appointment on order to pick up their pie in Boston on an ordinary schedule and basically so could anyone within a National in-visa’ed transfer zone. So that small store has a new commerce issue …. what will ever happen? Wow. Wouldn’t that be something to see?

A Quick Ad: just a suggestion for people who like to sometimes cater and/or carry out/take away their holidays

We’ve got starter staples like pumpkin and apple — then we hit the big leagues with Salted Caramel Peanut Butter Fudge Pie, Pear-cranberry Lattice Pie and other amazing pie recipes.
— Read on www.goodhousekeeping.com/food-recipes/dessert/g822/pie-recipes/

When it comes to the holidays, eating delicious food comes first and foremost! From Thanksgiving turkey to Christmas Eve ham and Hanukkah latkes, so…
— Read on www.thedailymeal.com/best-holiday-pies-recipes/slide-20

Please be aware that today (Nov. 9, 2019) is PIE DAY. I just decided that this morning. So if you are looking for other recipes besides pies (though there might be a few pies there too, no promises either way), you have to visit BIA (Brut Imperial Antarctica) through my WordPress group. Please do although as of the morning/early afternoon I still might not have finished any link posts there.

These best Thanksgiving pies will outshine all your other Thanksgiving dessert recipes. Whether you prefer pumpkin pie or pecan pie, apple pie or sweet potato pie, everyone will want a piece (or two, or three!).
— Read on www.countryliving.com/food-drinks/g1368/thanksgiving-pies/

The best part of Christmas is definitely all of the holiday desserts! These easy cake, pie, cookie, and cupcake recipes are exactly what you need to have a sweet celebration.
— Read on www.countryliving.com/food-drinks/g642/holiday-desserts-1208/

Celebrate the holidays with these Christmas pie recipes. Each dessert is packed with Santa-approved flavors like mint, chocolate and eggnog.
— Read on www.tasteofhome.com/collection/christmas-pies/

Sweeten your holidays with our pie recipes for an array of seasonal flavors: chocolate, pecan, apple, pumpkin, eggnog, cranberry and more.
— Read on www.midwestliving.com/food/desserts/favorite-holiday-pies/